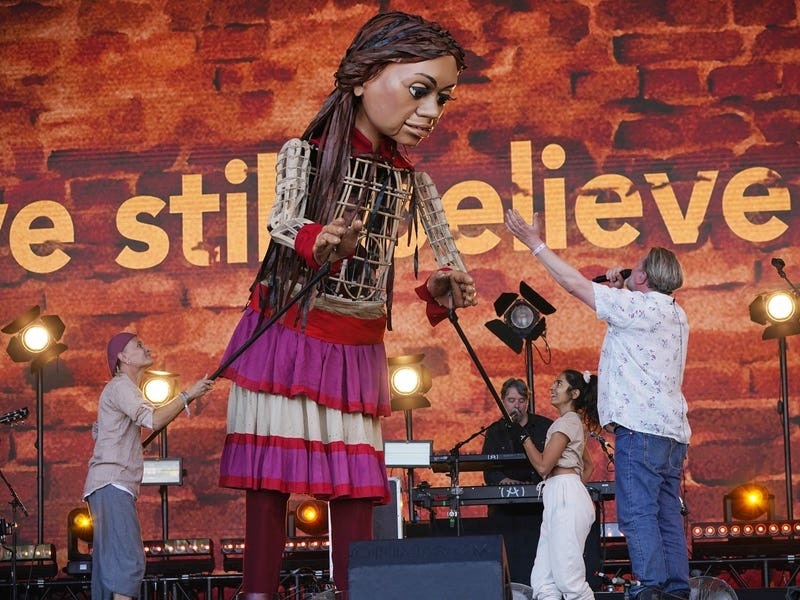 Elbow were joined by a giant puppet of a 10-year-old Syrian and a choir of refugees on the Pyramid Stage at Glastonbury, in a moment a Ukrainian asylum seeker said they will “never forget”.

The rock band from Bury, Manchester, sang their hit One Day Like This alongside Little Amal – designed to highlight the plight of child asylum seekers – and members of the Citizens Of The World Choir, a group of 50 singers from over 30 countries which was founded in 2015 in response to the Syrian refugee crisis.

After a tour around England this month, 3.5m (11ft) tall Amal was walked around the stage before finishing the song holding hands with Elbow frontman Guy Garvey.

Ukrainian Citizens Of The World singer Anna Vryzhan, who is originally from Mariupol, a city that sustained heavy bombardment during Russia’s invasion, left her home country in early March and said she will “never forget” being on the Pyramid Stage at Worthy Farm.

“I don’t have the words, I just have emotions to cry and scream – thank you so much for this experience, I will remember it forever,” the 28-year-old told the PA news agency.

The 23-year-old said after his performance: “I can’t believe what I’ve done and how far I came with this choir.

“Until next year, until I’m (not) alive I think I will show off about what I’ve done today.”

After the final round of the lyrics “throw those curtains wide, one day like this a year will see me right”, a message was transmitted on the large screens either side of the stage offering information on the Citizens Of The World choir, who also performed on Sunday morning on the Avalon stage.

“We are buzzing… we’re so grateful to Guy Garvey and Elbow and Glastonbury,” the choir’s musical director Becky Dell told PA.

“It was wonderful to share the stage with Little Amal, she is breathtaking and it’s just incredible to think that she has walked from Syria to the Glastonbury stage and we shared that incredibly special moment with her.”

Little Amal journeyed from the Turkish-Syrian border to Manchester in July 2021, and this month embarked on her New Steps New Friends tour, visiting 10 towns and cities across England to share the message: “Don’t forget about us.”

“I thought it was absolutely fantastic… it’s a powerful message to bring to this huge crowd of people,” the 37-year-old told PA.

Asked whether the performance would have shared a message with the Government over its policy to send refugees to Rwanda, the insurance broker said: “I should hope so.

“That shared the word with all the crowd and everybody is all in the same mindset, I hope they will listen.”

Her husband, Jamie Cadman, added: “Will they listen? That’s another story.”