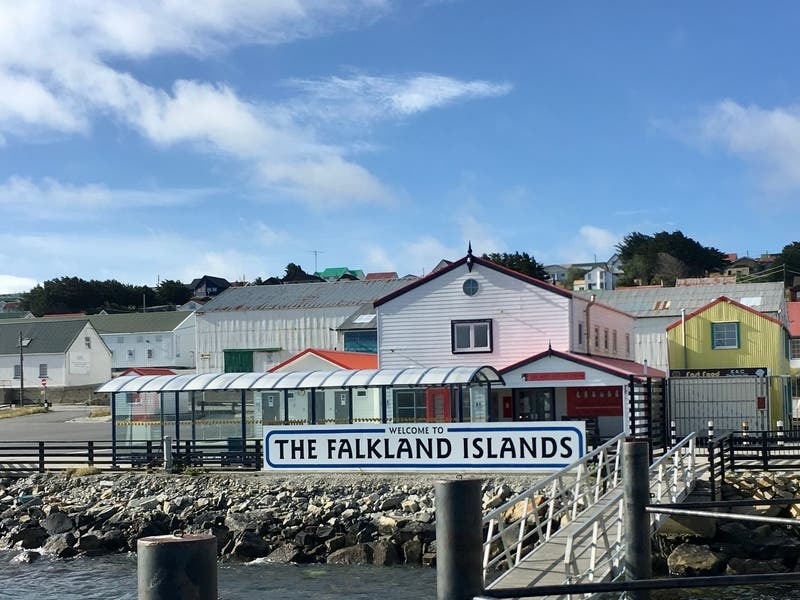 Falkland Islanders have spoken of their gratitude for “freedom” to mark the 40th anniversary of British forces landing on the Islands as part of its recapture from Argentina in 1982.

Throughout May 21 and 22, 1982, British troops carried out an amphibious landing at San Carlos in the Falkland Islands. Argentine forces went on to surrender on June 14, 1982.

The last landmines were cleared as recently as 2020, but craters, detritus, and countless memorials can still be seen dotted around the Islands.

Now 40 years on from the invasion, the Falkland Islands Government says it is a “forward-looking nation, determined to take control of our own destiny and shape our own success”.

Now 44, he works as a wildlife guide and photographer.

Speaking to the PA news agency, he described his gratitude for the “freedom” the Islanders have.

“Whilst we are Falkland Islanders, we are also very passionate to be British.

“People here are very grateful for what we have, whether that is the natural environment or the community spirit.

“Freedom is also something that people cherish dearly. Many have experienced this being taken away and I believe, therefore, cherish things more.”

The result was 99.8% voting in favour of remaining as such.

Mr Pollard said the vote “clearly showed the Islanders’ feelings”, but added that “there is constant frustration in the Islands that in 2022, the right to self-determination is largely ignored by many”.

“We are of course very grateful for all the global support that we do get. For many here, the invasion by Russia, (an) aggressive neighbour, into Ukraine, evokes many memories from 1982 and similarities can be drawn.”

She runs a guest house in Port Stanley, the capital, and described to PA her experience of the Falklands.

“I am passionate about the Islands and have used every opportunity to promote them.

“My business made that very easy. The wildlife and ruggedness are unique and the beaches (are) spectacular. When the sun is shining and there is no wind it is stunning.”

Ms Betts said Islanders still reflect on the war, but added: “In a strange way though I feel the war did us a favour.

“I don’t think the Falklands would be where they are today otherwise.

“We are now a thriving independent community with the exception of our defence of course. It’s very comforting knowing they are here to protect us.”

The Ministry of Defence maintains a permanent presence on the Falklands, with more than 1,000 personnel stationed there, along with Typhoon fast jets and the Royal Navy’s HMS Forth.

The main airport, RAF Mount Pleasant, receives two flights from the UK each week, known as the airbridge, as well as a weekly flight from Santiago, Chile.

The Falklands also have a regular cargo ship delivery approximately every six weeks.

“On the whole, the Falklands are well-supplied with most things” Ms Betts told PA.

“The supermarkets are extremely well stocked. In fact, there is very little you cannot get here. The airbridge brings lots of mail in so people shop online,” Ms Betts added.

The Falkland Islands Government is the biggest employer, with agriculture, retail and tourism other top employers.

Sport is played across the Falklands; the country is represented at the Commonwealth Games, and an annual horse race is held every Christmas. The Stanley Golf Club claims to be one of the most southerly golf courses in the world.

Residents live in either Port Stanley, or ‘Camp’, a term used to refer to anywhere outside of Stanley.

Port Stanley was recently among eight places to win coveted city status as part of celebrations for the Queen’s Platinum Jubilee.

Pete Biggs, chairman of the Falkland Islands’ Legislative Assembly, said: “We are utterly thrilled to have been chosen for this very rare award,” adding: “This celebration of her extraordinary reign comes at a time when we in the Falkland Islands are equally reflecting on an extraordinary time in our own history, as we remember the events of 74 days in 1982 when we were invaded.

“For our small community it was an unprecedented time, but I am delighted that, 40 years on from those dark days, we are being recognised in this way – I think it goes to show just how far we have come in that time. In the past four decades we have built a thriving, prosperous nation which continually looks to the future while respecting our past.”