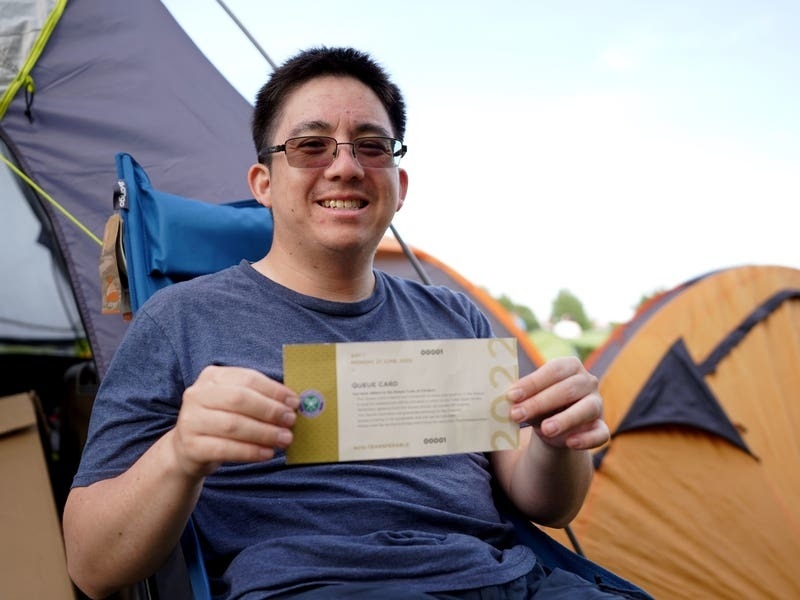 Excited tennis fans are set to queue overnight to get their hands on tickets for the opening day of Wimbledon, as the tournament returns to normal service after two years affected by the pandemic.

Hundreds of people are camping outside the All England Lawn Tennis and Croquet Club in south-west London after travelling from all over the world to attend the tournament which starts on Monday.

Novak Djokovic will begin his defence of the men’s singles title on Centre Court on the championship’s opening day, followed by crowd-pleasing appearances from British players Emma Raducanu and Andy Murray.

The tournament was cancelled in 2020 due to the coronavirus pandemic, and was held at only 50% capacity in its first week in 2021, and required visitors to be fully vaccinated or to have tested negative 48 hours before attending.

He told the PA news agency that he is most excited to see Rafael Nadal and Serena Williams play but added: “I want Nadal to win but I think Djokovic is going to win.”

Second in the queue was Doug Verbena, also from California, who hopes Nadal will win the men’s title this year: “I like that he’s such a good sportsman. You know, he’s a humble guy.

“I mean, he’s what sports should be, he’s not so obsessed with himself and he treats people like people.”

Meanwhile Danilo, from Naples, Italy, arrived on Saturday in the hope of securing tickets for the tournament.

He said queuing for tickets “is one of the best experiences in my life because here you can feel the real taste of tennis”, adding: “Because here there are 1,000 people that wait for the same moment with you and you can share your feeling, your emotion for tennis.”

Norma Rossillo, from Mexico, joined the queue on Sunday morning with her mother.

She estimates that she is around 170th in line, and is most excited to see Andy Murray and fellow Mexican Fernanda Contreras Gomez play.

She told PA: “It’s exciting for us, we tried it two years ago and we decided to come back this year again.

“I have been to the US Open as well, this is much better, much more fun definitely. The whole experience of queuing, it’s cool.”

He has queued for tickets every day of each tournament since the mid-2000s and was sitting with friend Simon Edwards, from Gloucestershire, who he met through queuing for Wimbledon tickets over the years.

Mr Nelson said of the queuing experience: “In the early 2000s, provided you turned up by midnight the previous night you would get a Centre Court ticket, but now it’s midday the previous day, probably sooner.”

He added that he was most excited to see the new women’s world number one Iga Swiatek, from Poland, and Nadal this year.

“It’s the first opportunity he’s had to win the calendar Grand Slam, so he’s won Australia and French in the same season for the first time. So that could be a good final, particularly if he plays Djokovic,” he said.

Wimbledon begins on Monday June 27, with the women’s singles’ final scheduled for Saturday July 9 and the men’s singles final on Sunday July 10.