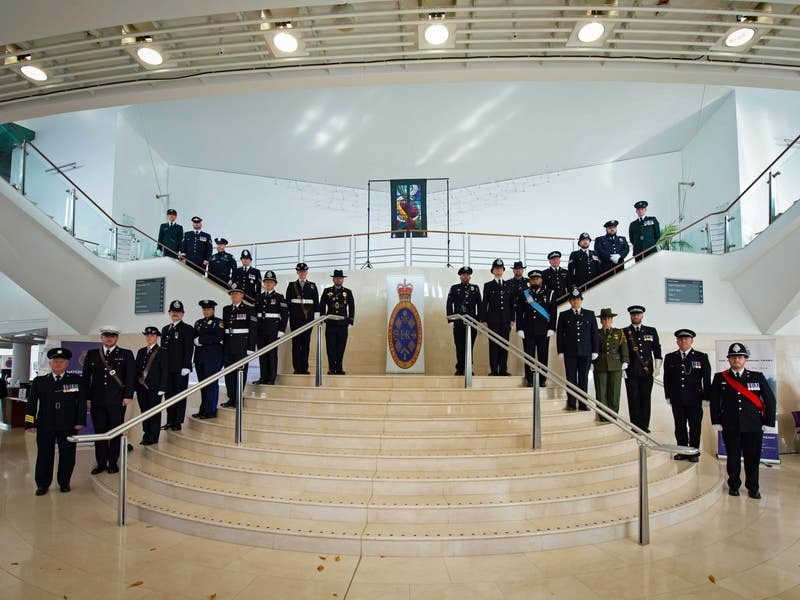 Fallen police officers from across the UK have been honoured at a service in Belfast.

Home Secretary Suella Braverman and Northern Ireland Secretary Chris Heaton-Harris along with chief constables were among the dignitaries who attended the event at the Waterfront Hall for National Police Memorial Day.

No members of the Royal family were in attendance as they continue a period of mourning following the death of the Queen.

Almost 2,000 people, including family members of fallen officers, attended and stood to remember officers who gave their lives in service.

“To all the officers who lost their lives while working to keep us safe, we thank you and we honour you,” she said.

“Their bravery and commitment to their duty was unfaltering – society owes them and their loved ones a debt we cannot repay, but it is one we will not forget.

“As Home Secretary I make a promise to give police the powers and tools they need to do their jobs safely.”

“It was an honour and a privilege to attend today’s annual National Police Memorial Day service, hosted in Belfast, and to join relatives and colleagues of fallen officers, along with UK Government colleagues,” he said.

“It is right and proper that we remember those who paid the ultimate sacrifice in their duty of protecting the wider community.

“We thank them and service personnel from across the UK for their service and dedication.”

The Police Service of Northern Ireland (PSNI) lit up their headquarters in blue on Saturday evening in memory of fallen colleagues.

“Today’s event was a humbling and moving experience in what has been an extraordinary few weeks following the death of Her Majesty Queen Elizabeth II,” he said.

“It was an honour to have the opportunity to meet with many families from Northern Ireland and across the United Kingdom and to remember their loved ones who have paid the ultimate price in service of their communities.”

During the service, prayers were said by family members, including Stephen Bromilow, father of PC John Edward Bromilow, 23, of the Lancashire Constabulary, who died on August 18 1979 in a road traffic collision while escorting a prisoner.

Candles were also lit by relatives in remembrance of officers throughout the UK who have lost their lives, one from each of the four nations of the United Kingdom.

There was silence as petals of remembrance, representing all who have lost their lives, descended from the gallery as the orchestra played Abide With Me and the Last Post was sounded.