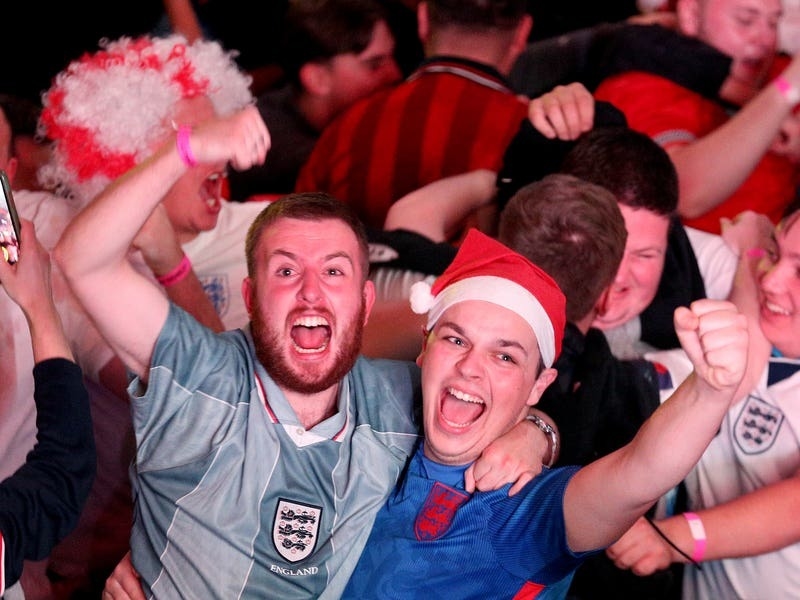 England fans were sent into raptures by half time as England scored two quick goals before the break in their crunch World Cup knockout games with Senegal.

Three Lions supporters admitted there were nerves ahead of kick off as they were greeted by a carnival atmosphere of dancing Senegalese fans ahead of their crunch World Cup knockout game.

At the Boxpark in Croydon, south London, fans, some wearing Santa hats, burst out into roars of “I’m England ’til I die” after Henderson’s opener.

Some predicted an “easy” win for the Three Lions in the round of 16 tie on Sunday, while others thought it would be a “tough” match.

The tension amongst the regulars at The Eastney Tavern in Southsea, Hampshire, was broken by loud cheers with friends hugging each other at the bar as England scored their first goal.

And after the second goal just before half time, he added: “Here we go.”

Prime Minister Rishi Sunak said “hats off” to controversial host nation Qatar for running an “incredible World Cup so far”, adding: “The group stages will be remembered as one of the all-time greats.”

In a tweet before the game, Mr Sunak added: “Come on England keep the dream alive.”

There was a lively atmosphere outside the Al Bayt Stadium in the host nation’s capital city Doha before the game, where England supporters were greeted by a vast Senegalese following – with many fans of the African nation drumming, dancing and waving flags.

Just minutes before the start of the game, hundreds of seats remained empty, but Senegal supporters were in fine voice.

England fan Karen Barham, 60, from Guildford, said she was “more nervous” about the Senegal tie than any other game for the Three Lions since she landed in Qatar for the start of the tournament.

Speaking outside the stadium, the solicitor told the PA news agency: “I’m really nervous about this one – the Three Lions meet the Desert Lions, I don’t think this is a walk in the park.”

Another England fan, Nolan Holleyman, 23, from Cambridge, said he was hoping the match would not be settled by a penalty shootout.

Back in the UK, pubs and bars welcomed hundreds of thousands of fans for the game, with millions watching on TV screens across the country.

Before kick off, England fans fell silent at The Eastney Tavern, Southsea, Hampshire, for the national anthem ahead of the start of the match.

Regular Joel said: “It should be a walk in the park tonight for England, we should see plenty of goals, at least three or four.”

Celebrations are set to continue into the early hours of Monday “regardless” of the score, he said, with spirits high among Senegal fans despite England being the favourites to win.

“England are the favourites, but all I know is Senegal will not lose without fighting,” Mr Ngassa said.

“They will make it very difficult for England and if there comes a chance for that knockout punch, they will take it.”

Describing his plans for the evening, the NHS nurse said: “The place is completely colourful, we have special Senegalese foods on the menu, we have drummers, beers, soft drinks, champagne, everything you could wish for.

“To be honest if it goes according to plan we are going to be celebrating until two or three in the morning, regardless – win or lose!”

Earlier in the day, England fan Hayden Smith predicted an “easy win” for the Three Lions, saying: “(Harry) Kane hat-trick, watch, he’ll score tonight – everyone is slagging him off but he’s going to get a goal tonight – easy 3-0, 4-0.”

Confident fans at the Cabana Hop Garden in the Radisson Blu Hotel in Doha were already looking forward to a quarter-final clash with France, with some saying England should have “too much” for Senegal.

The UK ambassador to Senegal said the two nations are united in their “passion for football”, describing the African country as “about as football mad, if not more, than the UK is”.

Senegalese fans based in England have spoken of conflicting family allegiances ahead of the game, with one fan joking his son “might not have supper, depending on the result”.