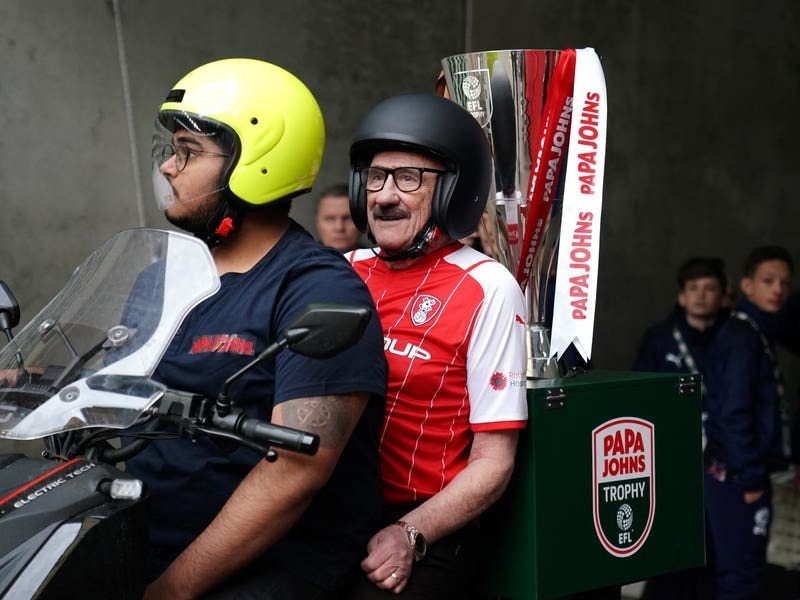 Football fans were treated to the sight of TV stars Paul Chuckle and Tim Vine dropping off the cup and matchball for the Papa John’s Trophy final at Wembley on pizza delivery bikes.

Rotherham fan Chuckle and Sutton supporter Vine made the appearance before Sunday’s thrilling clash between the two sides, the culmination of a tournament open only to the 48 teams in the bottom two tiers of the English Football League.

The pair entered the arena from opposite ends to the strains of Vine’s cup final song Rock Your Tambourine, with Chuckle’s bike carrying the trophy on the back.

The two comedians then pulled the matchball out of a takeaway container on the back of Vine’s bike and placed it on a plinth.

The spectacle was met largely with bewilderment by fans online.

One fan wrote: “Poundland don’t do Superbowls, but if they did…”

Not Going Out star Vine described it as “a career high”, adding: “And great to meet the legendary and very charming Paul Chuckle.”

In the end it was Chuckle who had the last laugh as League One Rotherham ran out 4-2 winners against League Two side Sutton after extra time.

Afterwards Chuckle posted a video of himself dancing in the crowd while celebrating the win.

Vine wrote: “We couldn’t have been any closer to winning it without actually winning it. A stunning effort from Sutton United today.”