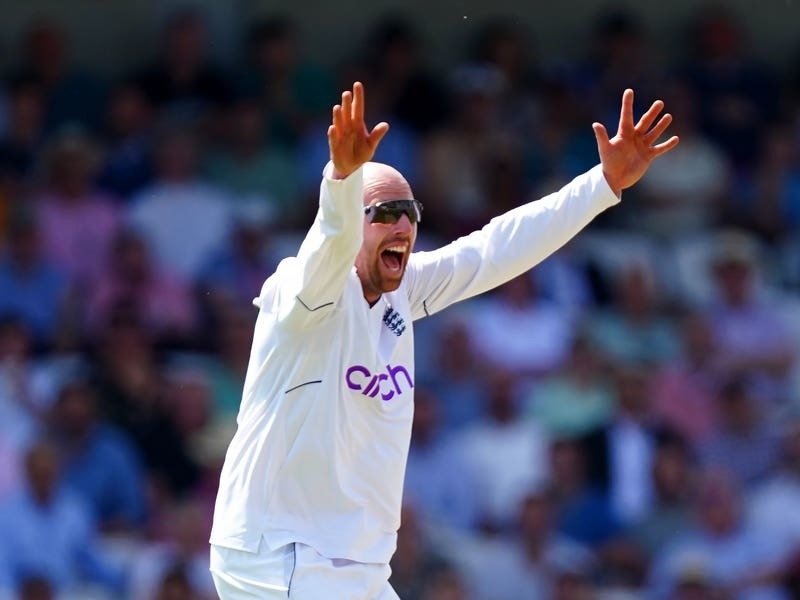 Jack Leach was happy to benefit from a rare slice of good luck with the freak dismissal of Henry Nicholls on the first day of England’s final Test against New Zealand.

Leach’s international career has been disrupted by a number of unfortunate circumstances, including illness, injury and even a concussion sustained while chasing after a ball in the first game of the LV= Insurance Series.

He was overdue a change in fortune and it came in the final over before tea at Headingley, when Nicholls drilled him hard down the ground only for an unplanned diversion off the middle of non-striker Daryl Mitchell’s bat.

The ball looped to Alex Lees at mid-off, giving England a bonus wicket in New Zealand’s stumps score of 225 for five.

Leach would probably have preferred to focus on his other success, trapping opener Will Young lbw when his first delivery of the day straightened nicely off the pitch, but there was only one dismissal up for debate at the close.

“It was unbelievable, I’ve never seen anything like it,” he said.

“It’s a silly game isn’t it? That’s what it made me think, it’s a stupid game we play. I like it because it says two wickets up on the board but I don’t like the dismissal. It’s not something I’m going to rewatch too many times.”

New Zealand batting coach Luke Ronchi took the setback on the chin, but suggested Nicholls may not have been feeling quite so magnanimous.

“Unfortunately for Henry, it’s his demise. We gave him a bit of space afterwards…you want to let people go through their own thoughts.”

The game was neatly poised at stumps, with England taking three wickets in the morning session after being asked to bowl first in serene conditions only for an unbroken stand of 102 between the in-form Daryl Mitchell and Tom Blundell to rebalance the scales.

“It was a great feeling (to take a Test wicket), you want to get it out of the way quite early,” Overton told Sky Sports.

“It was nice to get it, but I would have liked a few more. We’ve have had a good day, though, after being stuck in the field and be going at 2.5 (runs per over) all day.

“Leachy has had a phenomenal effort from the bottom end, to bowl 30 overs for 70-odd, that is a great effort that allowed the seamers to rotate on a hot day.”

Leach added: “With the weather and that wicket, it was good toil out there but I tried to be as aggressive as I could. I knew they were going to come at me a bit so it was just finding that balance.”