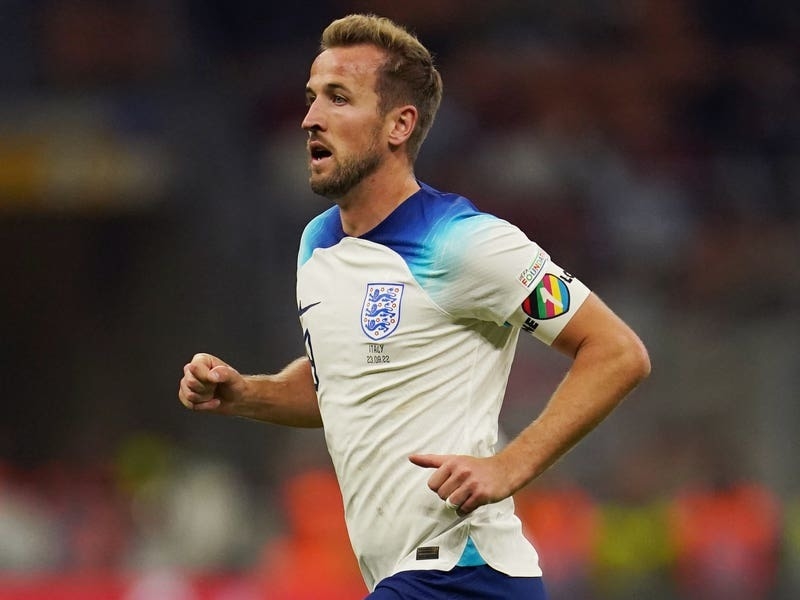 England captain Harry Kane could have faced sterner sanctions than being booked for wearing the ‘OneLove’ armband in their World Cup opener against Iran as manager Gareth Southgate said the team remain committed to supporting the LGBTQ+ community.

Southgate has not ruled out his England team making a gesture to highlight human rights concerns in Qatar, as other nations have, but says they will not be pressured into doing so.

The German team covered their mouths for the team photo before their opening World Cup match against Japan on Wednesday, while the Australia squad released a video highlighting issues in the host country.

The PA news agency understands the sporting punishment for Kane – as well as Wales captain Gareth Bale and the other nations who had signed up to the campaign – if he had worn the OneLove armband could have been more harsh than just a yellow card.

The booking would also have been issued in the dressing room before kick-off, meaning the skipper would not have been able to treat it as a chance to show an act of defiance by wearing the armband.

“I don’t know all the ins and outs because I wasn’t in the meeting but there was definitely a feel there were sanctions and not all of those were really clear,” said Southgate.

“The player had no say in that. But what that exactly looked like I don’t know because I wasn’t in the meeting. It’s not something I’ve wanted to spend more time on.

“I noticed the Danish coach speaking after the game and he felt he hadn’t got enough bandwidth to deal with the football. I think that’s the risk that we’re all running.

“There was a plan (before Iran), we weren’t able to carry out that plan. What do we do now? Do we all try to out-do each other on a gesture? However we do it probably won’t be enough. Probably could be criticised.”

Southgate, whose team face the United States in their second match on Friday, said: “I don’t think we should feel any pressure. I think we’ve spoken on these particular topics for over a year and we’ve supported all manner of good causes either as individuals or the collective.

“I think there’s a risk that everybody tries to escalate, if we tried to do a better video than Australia did, that would be impossible; whether we try to come up with a better gesture than Germany.

“I think we’ve got to be comfortable that we know what we stand for. That’s not to say we won’t do anything moving forward if the timing’s right, but I think we are rushing to be seen to be doing something, we could make an error that doesn’t land well.

“We want to support the LGBTQ community in particular and recognise that a lot of those people aren’t here with us, and we wanted them here with us.

The PA news agency understands Germany will face no disciplinary action from FIFA under Article 11 of the code. It states anyone “using a sports event for demonstrations of a non-sporting nature” may be sanctioned.

The OneLove group is understood to be considering legal options, but the German football federation confirmed that as of Thursday morning no appeal had been lodged with the Court of Arbitration for Sport.

Bale admitted Wales were far from impressed by FIFA’s armband ruling but said they would not be looking to stage a protest in the way Germany did.

“I know people have said we should have just worn it but I would’ve been sent off after about 25 minutes. Of course we support it but we’re here to play football at the same time.

“Just by not wearing the armband doesn’t mean we don’t support it. We’re all for equality and we’re trying to do the right thing, create that awareness.

“In terms of doing something else, I guess when teams try to do something else and the result doesn’t go the right way they get criticised for not concentrating on the football so for us, now that the tournament’s started we really need to concentrate on the football ourselves. Outside of the game, if there’s anything we can do to raise awareness or support we’ll definitely do that.

“We have campaigns going on that we are fully supportive of as an association and as a Welsh government. I want my players to focus fully on playing games of football and winning games. I am sure Germany now, in hindsight, will probably have the same message.”

Sunak under pressure over handling of Zahawi tax row